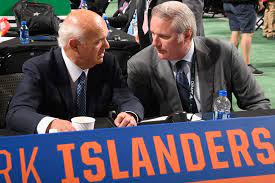 Having your name called in front of thousands of people or getting that phone call has got to be one of the greatest feelings for any young hockey player trying to make it to the pros. What happens after that? What are their chances of making it with their new club? The draft class of 2017 will be the final season of “graduates” from previous New York Islanders GM, Garth Snow. I’ve taken all of his draft choices and took the percentage of each round to evaluate his and their performance. Remember Isles fans, he still had the tough job of luring free agents to Nassau Veterans Memorial Coliseum and that played a major role in his decision making, but once a player was drafted, it always falls on the player to get themselves to the NHL. Here are the results from 2008 through 2017.

If a player was drafted by the Islanders in the 1st round, they had a 100% chance of playing in the NHL. Even if it was for 10 games, they still made it to the big club. After that, things change quite a bit. Here is a breakdown showing the round they were drafted in and the percentage the players had in trying to make a career in the NHL or AHL:

As you can see, if the Isles had a 2nd or 1st round pick then the likelihood of these players making it to the NHL was 75% or 3 out of 4 players. Snow was notorious for trading his 2nd rounder to move up in the draft and collect two 1st round picks during his time. After that, there’s a significant drop in the 3rd and 4th rounds and it’s an even bigger task if the picks were drafted in the later rounds. This folks is why I don’t look at the regular season stats (especially in juniors) after the players were drafted: At the very least, they’re coming in to Bridgeport for a certain amount of time. Once they get to Bridgeport, it’s up to the players (and coaches) to elevate their games and grow not only professionally, but personally as well.

So how is Lou Lamoriello doing? Well he has a smaller sample size (2018, 2019) but he’s already drafted 2 players now playing in the NHL and 8 out of 10 (80%) picks from those years are currently or will play in Bridgeport this coming season. Add 2020’s William Dufour and 2021’s Aatu Raty into the fold and I would have to say that Lou is doing a decent job in bringing in his draft picks.

This year and next years draft are supposed to be deep with talent, so I would like to see the Isles improve on their 3rd and 4th round numbers and getting the players into the NHL. It would certainly ease any free agency stress in the future and you can never have enough depth for a deeper playoff run and that goes for any team not just the Isles. As you will see on July 7th and 8th, teams like Montreal and Detroit will have plenty of picks to not only rebuild, but improve their current roster along the way. If Lou truly wants to win now (he does), then drafting someone who may be 2 years away from the NHL is the way to go, if available in the 3rd or 4th. If not, based on the percentage’s you’ve read here, maybe trading these picks for immediate help wouldn’t be a bad idea either. Stay tuned.